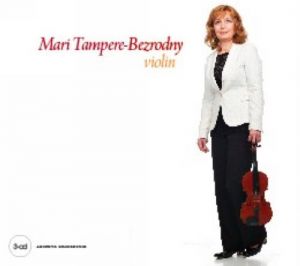 The current album sums up Mari Tampere-Bezrodny’s career as violinist which undoubtedly has been influenced and coloured by her long-time marriage and collaboration with one of the most outstanding violinist, conductor and teacher of the 20th century, Igor Bezrodny. His famous principle that all art including music has to be made with honest and noble aim, discarding all personal ambitions and materialistic considerations, has been duly followed by Mari Tampere-Bezrodny as an artist and teacher.
Coming from a family of many generations of musicians, the Mother Aime Tampere being an organist and her Grandmother Jenny Siimon a classical singer (mezzo-soprano) as well as professor of Tallinn Conservatory, Mari had close encounters with music at a very early age. Her concert career took off already during the days of Tallinn Music High School when, among other performances, she was participating in a solo concert of her Grandmother at the Great Hall of Moscow Conservatory. After graduating from Ivi Tivik’s class at the Music High School, she was recommended by a renowned Russian composer Nikolai Rakov to continue her studies as a student of Igor Bezrodny at the Moscow Conservatory during the years 1970–1977.
“Those were wonderful times, totally different from the present. We were sitting days long in Bezrodny’s class listening to his lessons before and after our own performances”, reminisces Mari Tampere. “We were all very different. As a former student of Abram Yampolsky, Bezrodny followed his great teacher's example – groomed and developed each and everybody’s distinctive qualities. His class in Moscow at that time was the most international one and it was not a conveyor belt for producing competition winners.” Despite that, Mari Tampere won the Estonian String Competition in 1975.
The Moscow-years laid foundation to Mari Tampere’s future life and career as violinist. After graduation, in 1977, she started working as senior lecturer at the present-day Estonian Academy of Music and Theatre where since 1996, she holds the post of Professor. In 1978, she married Igor Bezrodny and for many years she was not only his wife but also his closest colleague and assistant. Together they taught and trained young violinists at Sibelius Academy as well as in Moscow Conservatory and among others gave a strong start to the violinist career of their daughter Anna-Liisa Bezrodny. They have always been adhering to the principle that a talented student needs individual approach and a talented teacher. They made their permanent home in a small town of Espoo, 15 kilometres from Helsinki.
“There are many great experts on violin playing but much less great musicians. I have had the luck to know and work with several of them”, says Mari Tampere-Bezrodny.
Mari Tampere-Bezrodny has performed in more than 30 countries as soloist, alone or with renowned orchestras under the baton of Igor Bezrodny, Eri Klas, Juozas Domarkas, Mstislav Rostropovich, Peeter Lilje, Roman Matsov, Leonid Grin et al. as well as participated in numerous festivals together with musicians like Liana Issakadze, Dmitri Sitkovetsky, Erkki Rautio et al. Her long-time stage partners have been pianists Bruno Lukk, Ivari Ilja, Risto Lauriala, Aleksandra Juozapénaité-Eesmaa, Riina Gerretz and cellist Peeter Paemurru.
Категория
Классическая музыка
Catalogue N
ERP5512
Cмотрите рекомендации Руслании
Цена:
18.00 € 14.52 € без НДС
В корзину Добавить в избранное
Похожие товары
Выберите страну доставки издания:
Информация о Brexit: огромные задержки с поставками в Великобританию. Пожалуйста, рассчитывайте на двухнедельную задержку